A BUSY DAY AHEAD!

Our first engagement took us to Ottley House residential care/nursing home in Shrewsbury, where they held a World Alzheimers Day. There were various agencies with their stands on display and a person from the Alzheimers Society on hand to answer any questions anyone may have, and yes I had many.

There are around 500,000 people in the UK who are suffering from Alzheimers, it is something that there is no cure for only a few drugs that can offere some respite.

Above pictured Right to left: Tricia Durnell the Mayoress, the Scheme Manager, Alzheimers Regional Manager and Yours Truly.

Above we looked at the equipment on offer from pocket walking sticks, talking watches, bath seats to fold out chairs. Also other agencies involved were Hatchers the Solicitors, WRVS and Community Council for Shropshire.

We then went on a tour of the home and met up with residents who we had met on previous visits.

This lady had us in fits of laughter all the time we were in her company, such a delightful lady who knows what she wants and how to get it. I am going back to learn more off her as it will be of use in the Council Chamber.

We then had to leave as we had other engagements waiting for us to attend.

TEA IN THE CASTLE

Last week we found out that the Castle opening times had gone over to their winter timetable, closing at 1600 hrs. This meant that those there only had half an hour with us. This week we tried to get the guided tour to visit us at 1500 hrs, but again the Tourist Information Centre was still on summer timetable and did not know about the change of times at the castle, so we compromised and the guided tour arrived at 15.15 hrs. I have written this in the blog not to put blame at any door but to show how we all have to be flexable with our schedules when we can. When the visitors arrived we had 15 visitors and the guide for tea, scones with cream and strawberry jam as well as Tricias now famous and well liked Shrewsbury biscuits. We had visitors from Melbourne and Sydney Austrailia, and from the North of England, The Midlands and from the South of England. All of them staying in Shrewsbury and loving every minute of their time here.

We did get everyone away by 1600 hrs but by the time we exited the Castle it was just after 16.25 hrs. Next Wednesday will be our last Tea in the Castle this year.

This evening we attended the launch of the next production of the Shrewsbury Amateur Operatics Society, “TITANIC THE MUSICAL”. It was held at the Mytton & Mermaid Hotel at Atcham, a venue that was just right for the party they put on. We were greeted by the Societies Chairman Mr Steve Thomas, who is assistant Head Teacher at Belvidere Secondary School in Shrewsbury. It just happens to be the school where I am a Governor at, so I know him very well.

Amongst the guests were the people shown above, now a little game for you to play. See if you can put the names to the three ladies and their husbands. There is seven in the picture but you should be able to find the six I am looking for. All have high profiles within Shropshire, and they have all had their pictures shown somewhere within my blog in the past, that is all I will say. The answers will be given in a future Blog.

Above the cast from the show gave us a preview of what we can expect when the show is put on at Theatre Severn from Wednesday 14th. to Saturday 17th. March 2012. The tickets are on sale at the box office at Theatre Severn now.       http://www.theatresevern.co.uk/

My advice is go and buy them now or you may be sorry as I have a feeling that this will be a sell-out. Already the songs they sang sound like the finished article and they really raised the roof of the Mytton and Mermaid that night. 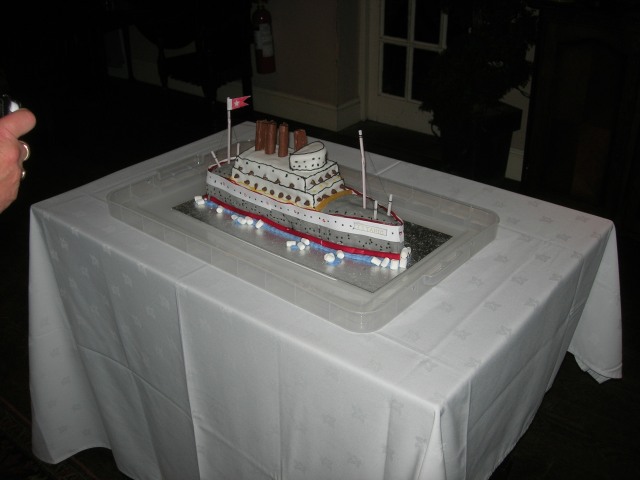 This picture shows a delightful cake of the Titanic that was auctioned off to help raise funds for the Operatics Society, after some strong bidding it was sold for £65 to a young lady who was going to take it to I think it was Hope House, forgive me if I got the name wrong as at the same time the other person who bid for the cake against the lady donated his £50 to make the total up to £115. That person was The High Sheriff of Shropshire Mr Richard Burbidge, a very generous deed. 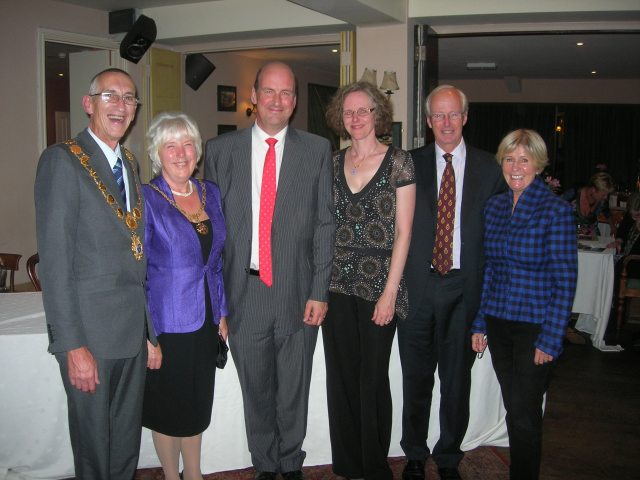 I am not going to name the above in the picture as it would give some answers to my question above, but the gent in the middle was the auctioneer for the night and his lovely wife.

We all left the hotel with the buz of the evenings entertainment still ringing in our bodies. Businesses or single applicants can sponsor the show with various deals such as a Gold, Silver and Bronze deal, also you can sponsor various parts of the ship/set such as a cabin, staircase etc. Just contact the Society to find out more.

If you click on the above link go to their web site. If you would like to sponsor part of the show then go to the contact page on their site and fill out the form telling them so and I am sure they will get straight back to you.

They are a not for profit group, but they have to male enough from the show to enable them to produce the next one. Their aim is to give the people of Shrewsbury affordable quality opera in a fantastic theatre. So if you like opera and want to be part of it and help make it happen then give them a call and see what is on offer. I have seen what the Gold, Silver and Bronze sponsorship is worth to Businesses and you get to watch the show as well as promote your business.